4 Parks in San Francisco With the Best Weekend Vibes

Looking for somewhere chill to spend the weekend? Check out the best parks in San Francisco

What comes to mind when you think of the outstanding features of San Fran? If you think of Silicon Valley or the Golden Gate Bridge, you aren’t wrong. However, the locals know that the San Francisco parks in the various areas and neighborhoods around the city are among some of the best in California. Coliving in San Francisco can give you access to these great parks as a local.

San Franciscans know that variety is the name of the game when it comes to the parks in the city. From Japanese tea gardens to parks that give you stunning waterfront views, you’ll have no trouble finding the perfect place to spend your weekend. To help you narrow down your list of parks to visit, here are the top four parks in SF. 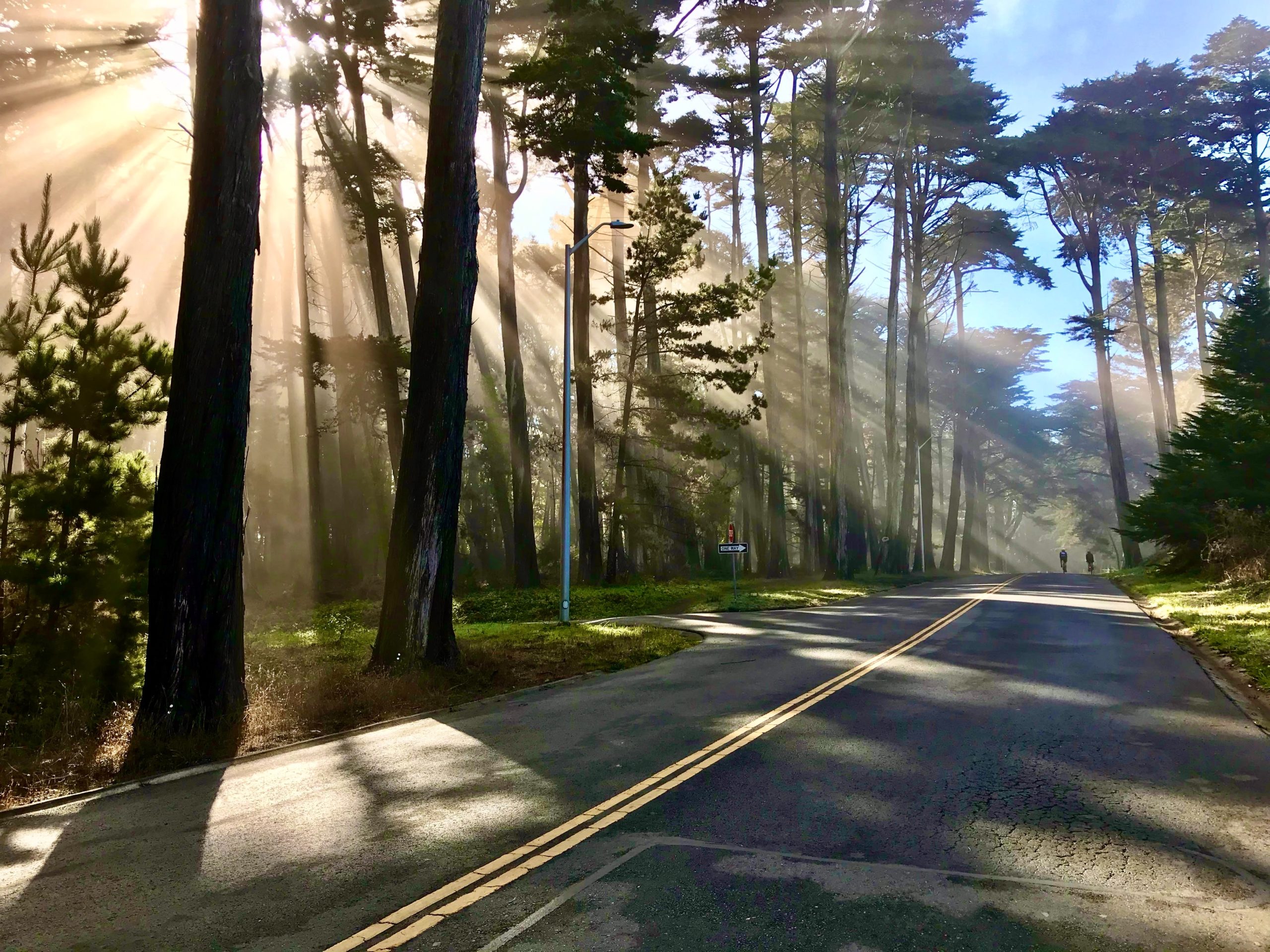 1. Nature, outdoor adventures and history collide at The Presidio

Any fans of natural beauty will love The Presidio, which is part of the National Park Service. The unique climate, geography and geology of the area has created a one-of-a-kind ecosystem that features animals and plants that can be found in few other places on earth. Specifically, the Presidio is home to some of the most-diverse bird populations on the planet, with more than 200 species calling the park home.

The park’s location on the northern tip of the San Fran peninsula allows the surrounding Pacific waters to produce a moderate climate that’s reminiscent of the Mediterranean. The geology of the area has also led to some standout features that have encouraged unusual plant and animal species to make this place home. Tectonic plate movement that occurred millions of years ago helped form the coastal dunes. In addition to the dunes, the park also contains grasslands, mixed woodlands and tidal marshes.

As for activities in the park, The Presidio contains more than 24 miles of walking paths and hiking trails with scenic overlooks. Some of the most famous are the Golden Gate Promenade, the Coastal Trail and the Presidio Promenade. If biking is more your style, you can explore 14 miles of paved roads and some unpaved trails. The park’s close proximity to the water means that you can also enjoy sailing, kite surfing, fishing and crabbing.

If you’re one of the people who loves to enjoy a little sports action, The Presidio has you covered. The park features a golf course, a bowling alley, multiple tennis courts and countless athletic fields. There’s also something for the history buff at the park. You can learn about the rich history of The Presidio, from the time of the native Ohlone people to the Spanish arrival in 1776 to the U.S. taking control in 1846. The Presidio clearly offers something for everyone. This neighborhood makes our list as one of the best neighborhoods in San Francisco. 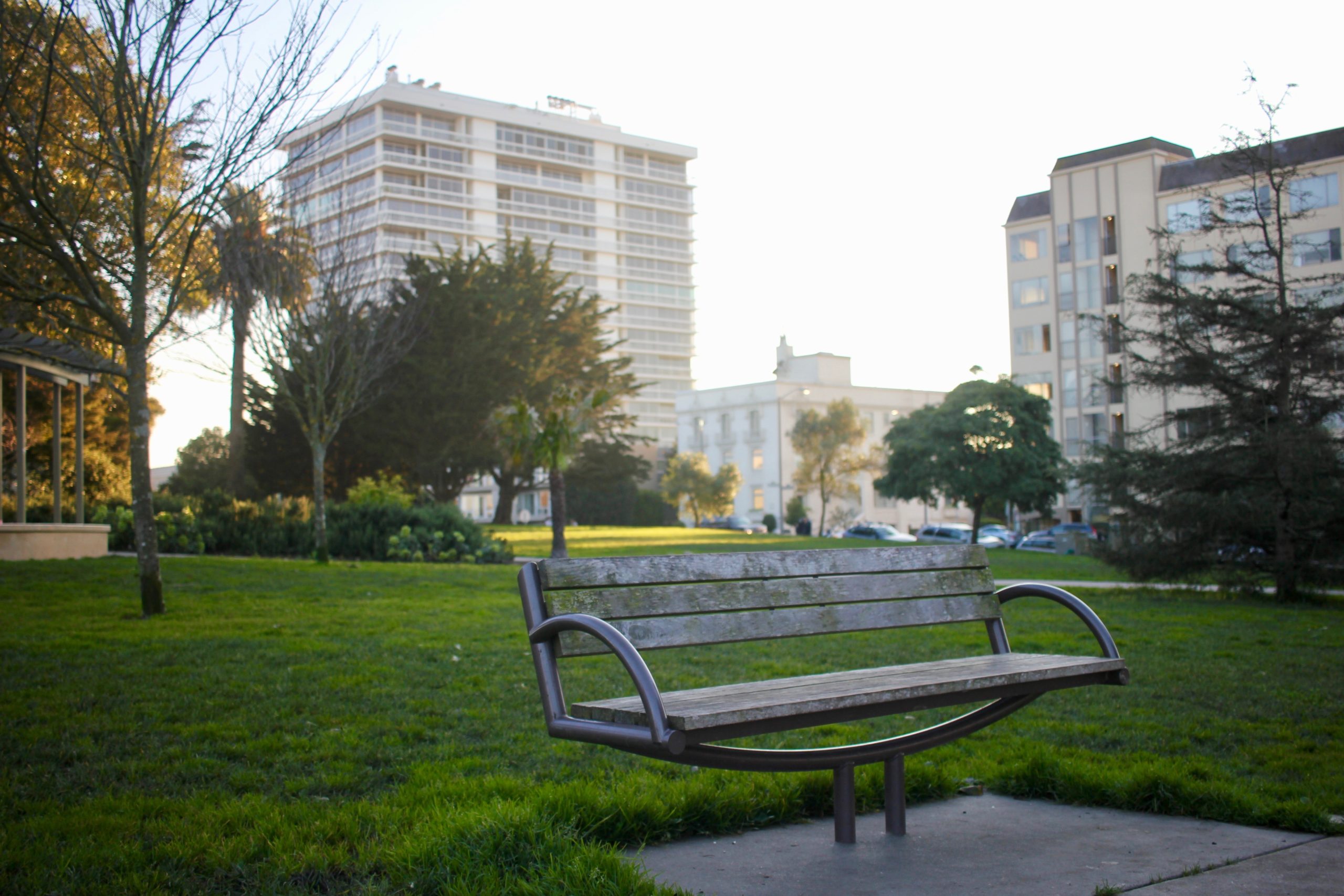 2. South Park allows you to enjoy a little green in the popular SoMa neighborhood

If you’re in SoMa SF and want to enjoy an urban park, you should make your way to South Park. Bordered by Second, Third, Bryant and Brannan streets, the park is surrounded by local shops, eateries and apartments. Known as the city’s oldest park and the “little park that could,” San Franciscans take great pride in the green space. This is especially true now, as South Park underwent extensive renovations in 2017, which cost $3.8 million.

The renovations took nearly a year, but they were worth it. In addition to improving the infrastructure and visual appeal of the park, South Park now features a new ADA-compliant recreation area. You’ll find circular steel tables and a curving cement walkway that provides views of the swooping meadows and beautiful flowers that come alive in the spring and summer. People also praise the park for departing from the “anti-homeless” design found in other parks of the city, as this park features benches that allow for napping.

If you have kids, or you’re hosting friends or family who do, you can find play areas for the little ones. The renovations added a universal playground that makes play more accessible, while the undulating forms add visual points of interest for everyone else in the park. After the kiddos tire themselves out, it’s easy to pop into a nearby restaurant for lunch or a snack. This park also has a picnic area, which can be perfect for a homemade snack time.

South Park has several claims to fame. In addition to being called “the cultural hub of San Francisco’s trendy interactive media district” in 1998, crews came to the area to film the 2004 movie version of Rent. The old wooden playground at the park was where the idea for Twitter was born in 2006, while South Park is also where Cate Blanchett filmed a memorable scene for her award-winning role in Blue Jasmine. Few other parks in the world have this many claims to fame. 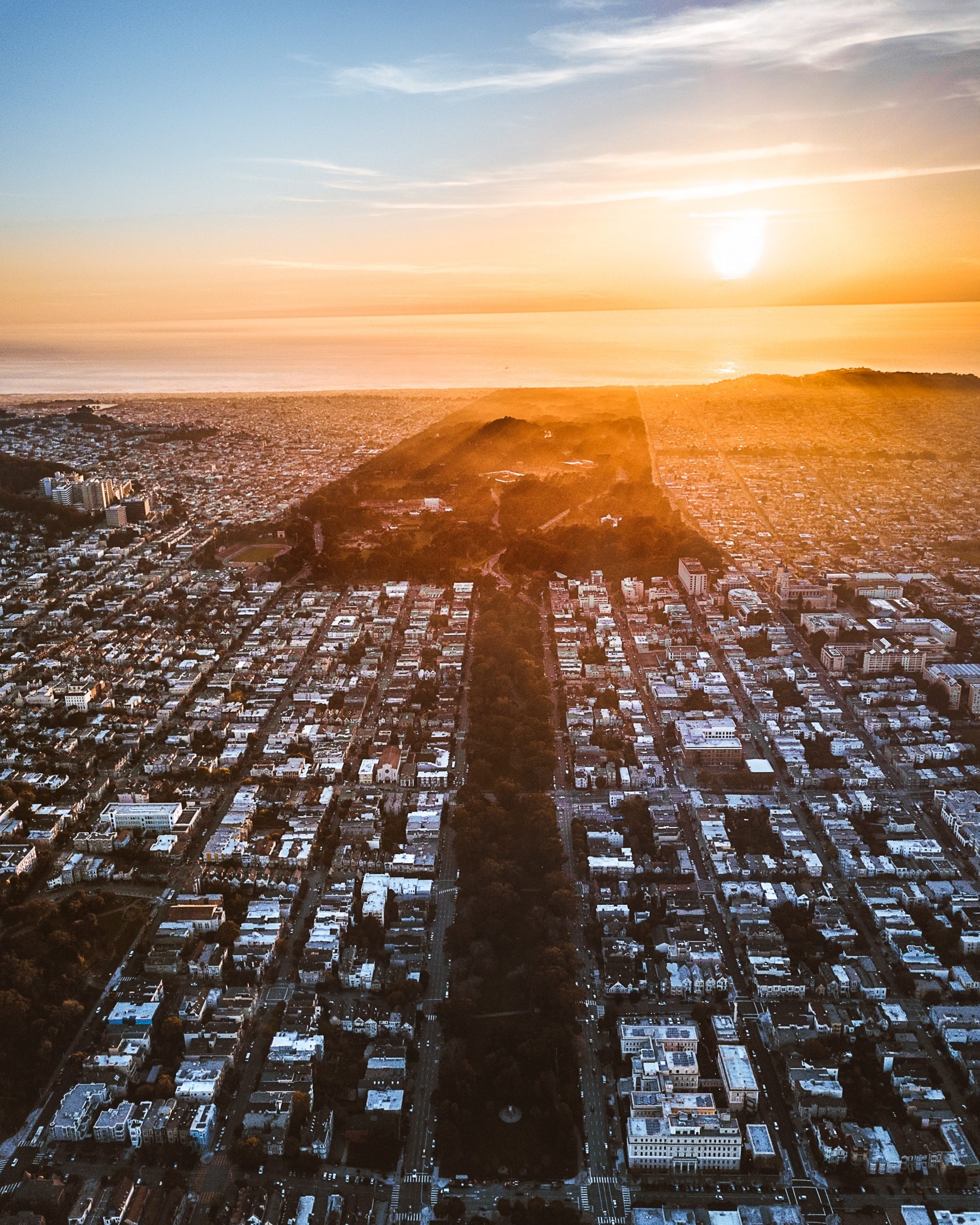 3. Visiting the world-famous Golden Gate Park is a must for any San Franciscan

There’s a good reason why Golden Gate Park is the third most-visited park in the United States. The park takes natural beauty in the form of flowers, trees, lakes and wildlife, and it adds in gardens, museums and outdoor activities to make it one of the best parks in San Francisco. However, keep in mind that while the park itself is free to visit, many of the attractions like museums do charge admission. Most attractions are within walking distance from the park.

For fans of flowers, you’re in the right place because Golden Gate Park features a wealth of them. Among the most-famous is the Japanese Tea Garden, which brings together waterfalls, regal lanterns, stately statues and beautiful blooms. You can even stop in the Japanese Tea House to grab a cup of tea to sip as you wander the garden walking path. Before you leave the park, you’ll want to be sure to stop by the San Francisco Botanical Garden to enjoy more than 7,500 types of flora from around the world.

Once you’ve looked at the flowers, you might want to take in some wildlife. You can head over to the Golden Gate Park Aquarium to do just that. Also known as the Steinhart Aquarium, you can view amazing aquatic creatures that range from African penguins to sharks and stingrays. If mammals are more your style, you can stop by the buffalo paddock on John F. Kennedy Drive to view these amazing creatures.

A short walk up the street takes you to hiking trails and outdoor gaming options. You can enjoy athletic activities that include horseshoes, golf, baseball and biking. The nearby golf course is a favorite among locals. You can also stop by the Golden Gate Park Stables to explore parts of the park on horseback. Not only that, you can also count on the park to regularly host events, so be sure to check the website for the most recent offerings. 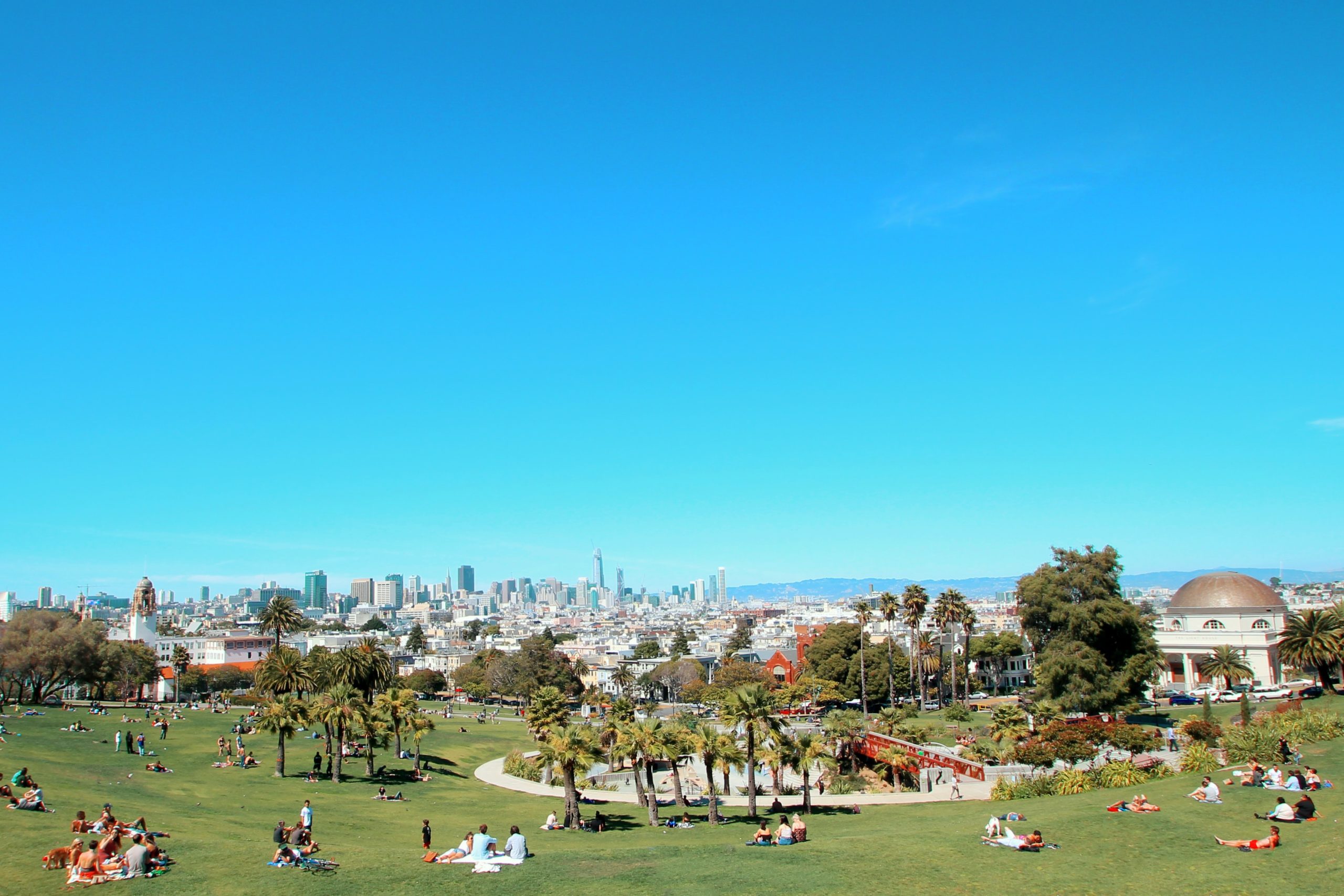 4. It’s easy to see why so many San Franciscans love Dolores Park

Spread out over nearly 16 acres, Dolores Park is one of the best parks in San Francisco. Also known as Mission Dolores Park, this is one of the most-popular and most culturally diverse parks in the city. You can find San Francisco’s Dolores park between Church, Dolores, 18th and 20th streets. Best of all, the Muni Metro J-Church Line runs along the western edge for convenient access from public transit.

The land has an interesting history because it was once a Jewish cemetery. After the City of San Francisco purchased the land in 1905, it established Mission Dolores Park. After the 1906 Earthquake, the park temporarily served as a refugee camp for more than 1,600 residents who lost their homes in the earthquake and resulting fire. Today, it’s nearly impossible to imagine the park’s past.

One of the biggest draws of the park is that it offers so much to do, while featuring a beautiful view of the city’s skyline. You can relax or enjoy a picnic on the lush green grass under the shade of a tall palm tree. Dolores Park is well-known for hosting many different types of outdoor events for the public, including festivals, performances and cultural events. You can even find exercise classes like Zumba in the Park.

Although Mission Dolores Park is not a dog park, dogs are allowed. You can enjoy walking your furry friend in San Francisco’s Dolores Park. You can also let him or her enjoy one of two off-leash dog play areas. Speaking of playing, this park offers a beloved playground for children of all ages, with convenient access to bathrooms. For adults who like to play sports, the park features a soccer field, six tennis courts, a basketball court and a multi-use court. All these features show why San Franciscans love this park so much. 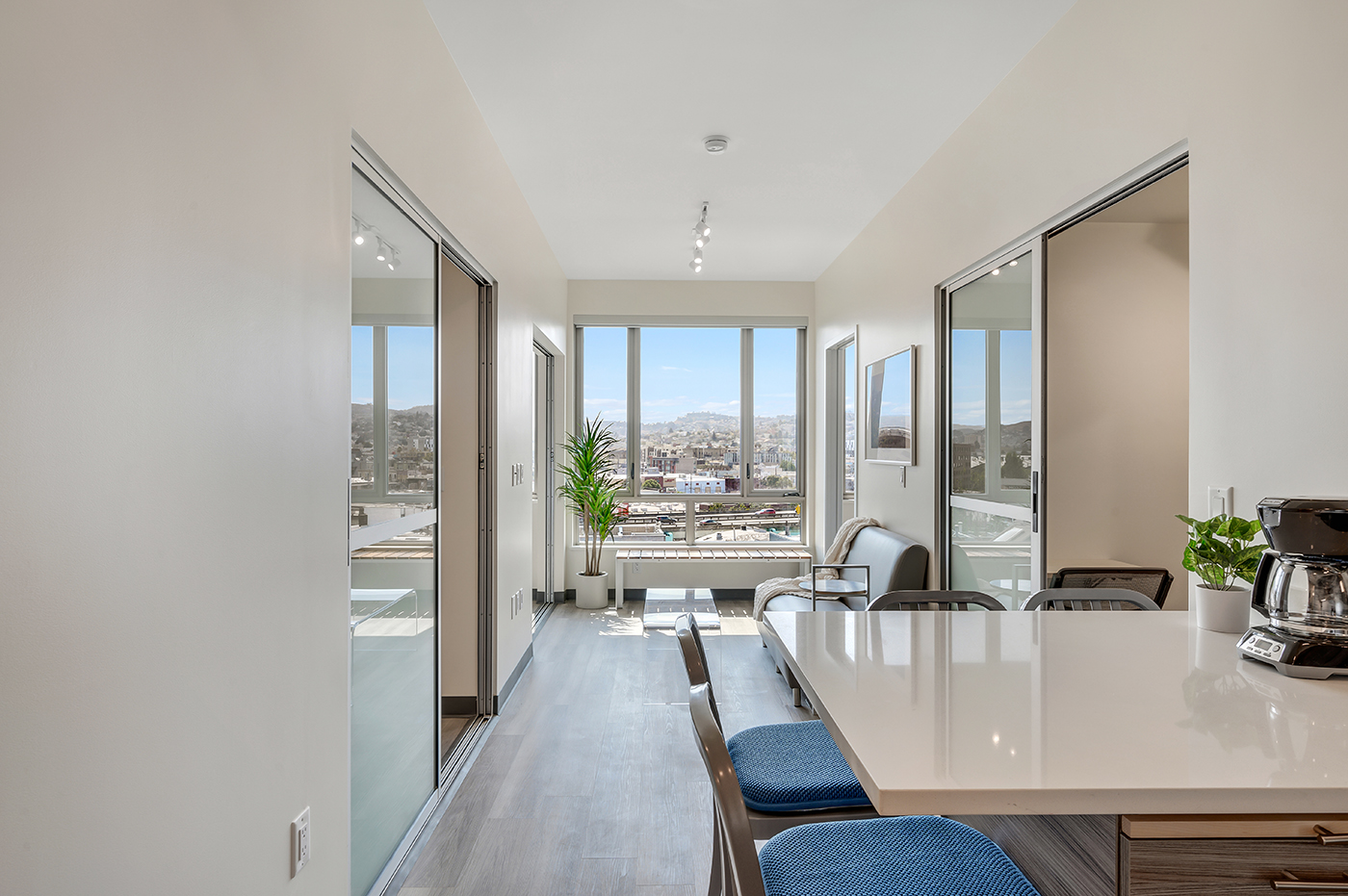 Do all these parks have you intrigued by the idea of living in San Fran? A coliving space in the SoMa neighborhood may be exactly what you’re looking for. You can enjoy city living for an attainable price by renting a private room in a beautiful shared suite within a friendly home. Explore coliving spaces in San Francisco today.